The CI task enables almost any action in your pipeline by pulling a specific Docker image from a registry endpoint, and deploying it to a Docker host configured as an Endpoint. It then executes the CI task script in the context of the running container. It is an incredibly powerful and flexible task type, because the image can have almost any tool or program in it.

The CI task container will run for the lifespan of the entire pipeline, so subsequent CI tasks within a pipeline will be executed in the same environment - this means that you can, for example, write files in container that will be preserved between Tasks.

If a Pipeline has been executed from a Git Trigger , and has been configured to clone the repository with the correct Inputs , the Git repository will be automatically cloned into the Working Directory.

As well as the common configurations available to all tasks, the CI task has:

The steps stage is essentially a Shell script that will be executed on the CI container image. This means it’s relatively easy to convert any exisitng Shell scripts into a repeatable CI task by using Pipeline Inputs , Variables , and Pipeline Variable Binding .

Artifacts (files) specified here will be stored in a Shared Folder on the Docker host configured in the Pipeline workspace. The below image shows a task where the SSH files are moved into the working directory (configured on the Workspace Tab of the pipeline). Then the file names provided for the “Preserve artifacts” configuration under the Steps code space. 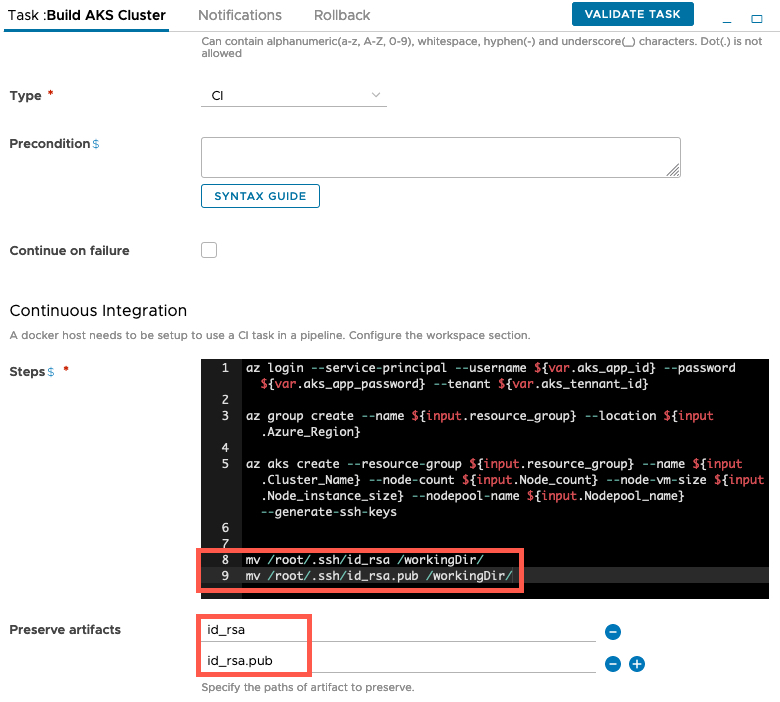 You can use the Exports feature when you want the result of a CI task to be available to the Pipeline. These are simple string exports that must be compatible with the JSON output format that the task returns. Exporting multiline strings, for example, does not export correctly.

An example use might be a BUILDTIME variable that will be used in naming throughout the pipeline - in the CI task steps the variable must be declared with the export keyword: